A two-sided story for the yacht industry at Cannes ’22 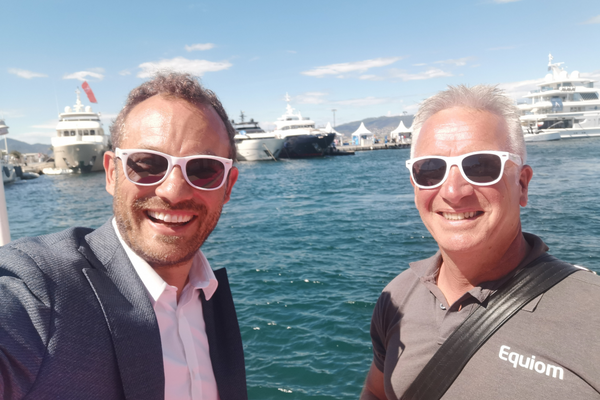 Equiom’s Head of Yachting and Aviation, Ian Petts and Andy Limbrick, Senior Manager – Crewing, attended this year’s Cannes Yacht Festival, Europe’s top in the water yacht show and one of the world’s major boating showcases exhibiting products and related services in the sunshine of the beautiful French Riviera.

Since its debut in 1977, the show has grown and now, celebrating its 45th anniversary, enjoys over 54,000 visitors, with 650 boats on display and 600 Exhibitors. With yachts ranging from 5 metres to the 73 metre Coral Ocean Motor Yacht and a mix of both power and sailing yachts on display. It is a diverse show taking in luxury products, supercars, an innovation zone and all the suppliers and services needed to run a successful yacht operation. The show certainly caters to all desires.

The story of this year’s show is one of asymmetries in trends. On the one hand, there is a high demand for yachting and a favourable exchange rate for international buyers, but on the other there are continued supply chain issues, inflationary pressures and the economic uncertainty across a recession-plagued Europe and demand for austerity from leading European Politicians.

The post-COVID trend of heightened demand for luxury products and (re)connecting with the great outdoors on the water has boosted demand significantly. This is further leveraged by the higher than ever numbers of new millionaires and billionaires, and across the board there is the desire for improved work life balance and to get on the water.

This combination of factors is pushing demand for yachting to record levels, however with build slots still scarce and supply chains stretched, it will be over a year and sometimes longer before people can have the yacht they wish for, even if they put a deposit down now. Indeed at the show there was some talk of build slot investment and speculation.

Brokers and dealers noted that the demand is not muted, despite weak economic growth figures and stock market indices such as the SNP500 being down more than 18% since the beginning of the year. Neither is demand dampened by a war on the borders of Europe or calls for economic and environmental sobriety by senior politicians. The prospect of going into this winter’s likely energy crisis, compounded by inflation increasing the costs of ownership and operation of a yacht, isn’t putting people off.

Indeed charter brokers, a key leading indicator of the yacht market, have reported a stellar season for the summer of 2022, and are already taking deposits on the best boats for summer 2023. They are however expecting price increases in the following year due to lack of quality good stock on the market. Brokers are also reporting a healthy brokerage market with international buyers coming to Cannes from across the globe. In this sellers’ market, discounting is much rarer and yachts are selling faster and often for the asking price.

The changing face of the buyer

American (both North and South), African and Asian buyers were healthily evident at the show with the US Dollar to Euro exchange rate being at parity favouring purchases for US-based buyers and businessmen and women who earn in Dollars and spend in Euros. There was also strong showing from US-based brokers and continued interest of US and wider American money in the yacht supply chain.

In Europe we are witnessing the biggest shift of generational wealth for a century and that is evident in changing tastes and desires in yachting. Speed, technology, ergonomics, design and connectivity of the yacht are changing fast and environmental consciousness is being prioritised.

Time poverty of a new class of owner who want to enjoy the yacht rather than enjoy preparing and maintaining was also evident as a large number of yacht managers discussed that they had never seen such high client demand for their holistic services. With Equiom being one of the biggest crew employers in the industry the team were able to reinforce at the show why Equiom’s robust structure and holistic crew employment solution is gaining in popularity.

The presence of the aggressively designed Lamborghini yacht, contrasted strongly with the graceful Sunreef catamarans and explorer designs shown by some Italian yards. The proliferation of different sailing configurations taken from the racing world and numerous foiling yachts offering enhanced speed and efficiency are clear evidence of changing desires and tastes.

The show featured a host of debut products from the Italian yards as well as the British Princess yachts who held their world premiere of the Princess V50 Open. The British Sunseeker yard also debuting two new yachts with the global debut of the stunning 100 Yacht capable of an impressive 29 knots, and the dynamic Predator 65 capable of 35 knots. Across the show in the sailing village there was a trend too for production yacht firms, who usually cater to smaller markets, to go larger with a 60 ft debut from the biggest by volume manufacturer in the world Beneteau and 57 ft model from Dufour.

With new owners at the show continuing to have VAT questions on the purchase and/ or refit of a yacht,  Europe appears to be a minefield of different rates and rules. The Equiom team were on hand to offer guidance in navigating these turbulent waters and offer ownership solutions and guide owners though their registration choices.

With increasing interest rates, banks both domestic and international were keen to get deals completed before further rate hikes. There exist a number of banking solutions and a renewed appetite from the banks to defer the VAT through a finance scheme known in France as a lease with option to buy, or alternatively use of mortgage products or Lombard loans against other assets in a family portfolio of assets.

Nearly all major brokers at the show were advertising that they now accept Bitcoin, however high platform fees and high spreads between Bitcoin to Euro and Dollar mean that there has been limited uptake of the facility. This is likely to change if today’s seller’s market changes to a buyer’s market where buyers can dictate the terms of the deal.

At the show there was a big drive for more sustainable yachting from the building, through to the operations and the final recycling of products. The environment was top of the agenda with the show pioneering a green agenda throughout the exhibition with a specific visitor itinerary highlighting the companies that are innovating and providing sustainable alternatives.

This trend follows on from several French politicians comments this month on luxury consumption and threats for higher taxation on luxury goods, in particular yachts and private jets. France is not unique in its proposition and innovation in luxury goods taxes, Canada also recently introduced a luxury sales tax specifically for yachts.

Several captains were discussing the cost of fuel being higher due to oil prices and volatility of the fuel price this summer making it hard to lock in a good price. The opaqueness of carbon offset schemes hindered their uptake as did the rarity of synthetic and sustainable fuels available.

The innovation zone of the show and various new products launched, showed that the industry recognises its need to drive for more efficiency in construction to reduce weight and drag, with ultimately some builders trying with new hull designs and even foiling to get the hull out of the water altogether.

The Equiom team, during the show were able to experience how foiling yachts handle rough weather, have reduced noise, enhanced ride comfort, ease of loading the boat with passengers, enhanced range, with a benefit of a 30% in fuel consumption travelling at over 35 knots by trying the SEAir RIB. This RIB, developed in association with the French Navy Seals and European Defense bodies, is proving to be very successful in its mission. Foiling tech is here, it’s in the Americas Cup, the defence industry is trialling it and it will shortly be brought to larger and larger yachts.

Some yacht manufacturers are moving towards sustainably sourced interiors using linens, corks and recycled PET foams and bio-sourced resins. Others are pushing the use of solar cells to boost energy onboard especially in the catamaran field. Some of the high tech designs are using solar and wind hybrid power, and are combining aviation and yachting technologies. These hybrids are being now put into production with for example the MODX inflatable wing system from Aeroforce Foiling yachts, Silent yachts catamarans and Sunreef solar skin sailing catamarans.

Electronics and the internet continue to push the frontiers, increasingly being used for the management of yachts and automation of sailing. The next generation want connectivity both on and off their yacht with the highlight being Elon Musk’s Starlink in a marine version being announced as available for superyachts.

The social and governance side of ESG was also discussed, the industry although already very international is conscious of its needs to improve diversity of gender and ethnicity and transparency in its supply and crewing.

Sanctions and compliance were common topics of conversation at the show with the expectation of continued pressure on Russian individuals and businesses supporting the Russian invasion of Ukraine as US and European politicians return back after their summer breaks.

A spate of yacht fires in the media also prompted discussion and hypothesis of why so many fires had occurred during the summer. However looking at the statistics, yachting is still very safe with similar fire accident rates to commercial shipping, and it was noted that the smaller yachts were being affected significantly more than the larger ones.

The event was overcast both by some rough weather with one Lagoon Catamaran hitting the rocks near the entrance to Port Canto, but also the passing of Her Majesty the Queen Elizabeth II who had over the years made a remarkable contribution to the yachting world with her late husband the Duke of Edinburgh.

The British Royal Family has a distinguished history of seafaring. Over the centuries the monarchy has sailed aboard 83 royal yachts, including the most recent, HMY Britannia, and raced and owned the 1948 Campers and Nicholson Dragon Bluebottle, an Olympic winning yacht, as well as being the Patrons and active supporters of the international Royal Yacht Association.

Ian Petts, Head of Yachting and Aviation, Mark A Hagan, Director - VAT and Scott Le Cornu, Head of Equiom Crewing will represent Equiom at Monaco Yacht Show, 28 September to 1 October. The team will also attend the Voiles de Saint Tropez, the B2B Amsterdam METS show and the Paris Yacht Show later this year. Please reach out for all your holistic yacht tax needs, corporate structuring, accounting, operations, and crewing solutions for your yacht.

Considering a superyacht? Think about VAT

The French Ensign – a growing registry with a bright future