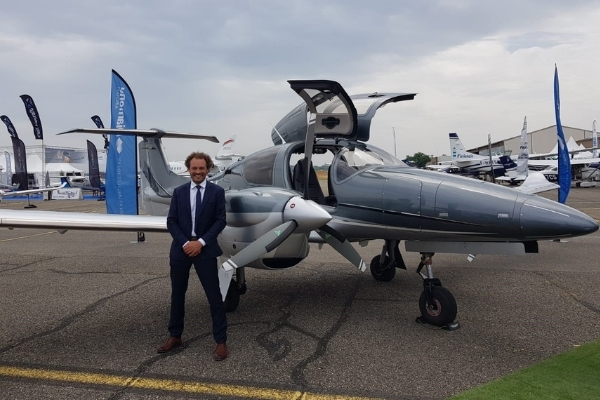 Private jet manufacturers and turbo prop manufacturers and dealers were well represented at the three day event. It was great for Equiom Group to take the pulse on the ground of the European aviation industry and also touch base with American manufacturers Piper, Textron Aviation and Kodiak. We met with Swiss, Italian, French, Hungarian owners and pilots who had flown in from across Europe in their own planes to see the show.

It is clear there is high client demand and interest during and post Covid, with private aviation being one of the most Covid resistant industries. We were able to talk with some owners about the advantages of ownership within a structure and the services of accounting, cost control and tax consultancy. With many owners looking to offset their costs by some limited charter activity, we were pleased to offer solutions and communicate the Equiom resources of 20 jurisdictions and 37 aviation staff at their disposal.

The opportunities presented by Brexit and temporary importation for non-resident European owners were two popular topics with clients. However it is clear Brexit is providing some logistical issues getting parts between UK and Europe for some manufacturers and operators. It was reported that some British suppliers were actively looking to set up a permanent European establishment to assist supplies into Europe and vice versa for some French suppliers into the UK and we were on hand to advise on both Monaco and France opportunities and also discuss our Netherlands and Malta offices being onshore and able to assist in these matters.

The complications involved with insurance for private aviation and the need to get specialist insurance advice and comprehensive coverage were debated with insurance providers at the show. Brokers of aircraft finance were seeing high levels of demand, but reported that some banks and financiers were only willing to lend to European clients and only to aircraft on European registries. The trend of some governments such as the Canadian government to target high value luxury assets was also addressed. The worldwide shortage of microchips is also causing delays in deliveries of radio and communication equipment for aircraft pushing out delivery times.

Environment issues were top of the agenda with France’s first electric plane on display and several suppliers showing new technologies ready for the electric aircraft revolution.

The robust second-hand values and lack of very good product on the market were key topics with several brokers. This provided some enlightening discussion on depreciation rates on some aircraft with owners of well maintained, top quality aircraft reporting they were being solicited to sell their aircraft for more than its purchase price due to a peak of post Covid demand.

The family side of aviation and the freedom to travel through Europe were consistent topics of discussion, with dealers reporting a high number of new entrants. With the Textron Caravan and Daher Kodiak on display, their dealers were reporting the joy owners experience with owning a plane that can take the family and pets off on different weekend vacations. It was great to see float planes receiving renewed interest for the freedom they offer.

The Aero schools and universities were busy with people learning how to pursue careers the aviation industry, with the Federation of French Aviation offering a subsidy to young people to pass their aircraft qualifications, it’s exciting to see the French youth signing up to embark on pilot training. France offers one of the highest numbers of private aerodromes in Europe, providing a unique opportunity for individuals to experience private aviation.

Drone technologies, licensing and insurance were also key themes, as well as how to mitigate the security threat they can pose at airports and for private individuals. Urban air mobility with use of air taxis is becoming a hot topic, and Electric Aviation Concept were proudly exhibiting their Whisper 8 rotor Vertical Take-Off and Landing (VTOL) electric rotorcraft. There were several aerobatic planes and helicopters also on show.

Overall, a brilliant few days talking about everything from Brexit opportunities and challenges to corporate structure ownership solutions. It really was wonderful seeing first hand some ground breaking innovation in the industry – fantastic to see so much demand and passion.

How will 2020 impact the future of the aviation industry?